A new independent Insightrix Research poll reveals support on issues such as the building of a new hospital, and the fairness of municipal taxes within Weyburn.  Results are a bit more mixed regarding the lowering of speed limits around school zones and whether or not Weyburn is undergoing too much development for its current and future needs.

A new independent poll conducted by Insightrix Research shows that the majority of Weyburn residents would like to see a new hospital built. Overall, 82% of residents support the addition of a second hospital. Another 14% don’t want to see a new hospital erected in Weyburn, and 4% aren’t sure. Those who disagree cite reasons such as, if a new hospital was built they would still be referred to larger centres for many procedures (34%), the old building just needs to be fixed (25%), and the current hospital just needs more staff (23%), while the remainder didn’t know or didn’t have a comment. Females and those aged 18-34 are more likely to want a new hospital built than males and those aged 35 and over.

When asked about the potential location of a new hospital, 73% of respondents said it should be located close to the current hospital.

Insightrix asked Weyburn residents if they thought municipal taxes were at a fair level. Respondents generally agreed that they paid a fair amount of tax (68%), while only 13% believe that they pay an unfair amount of tax. The remaining 19% didn’t know or weren’t sure. 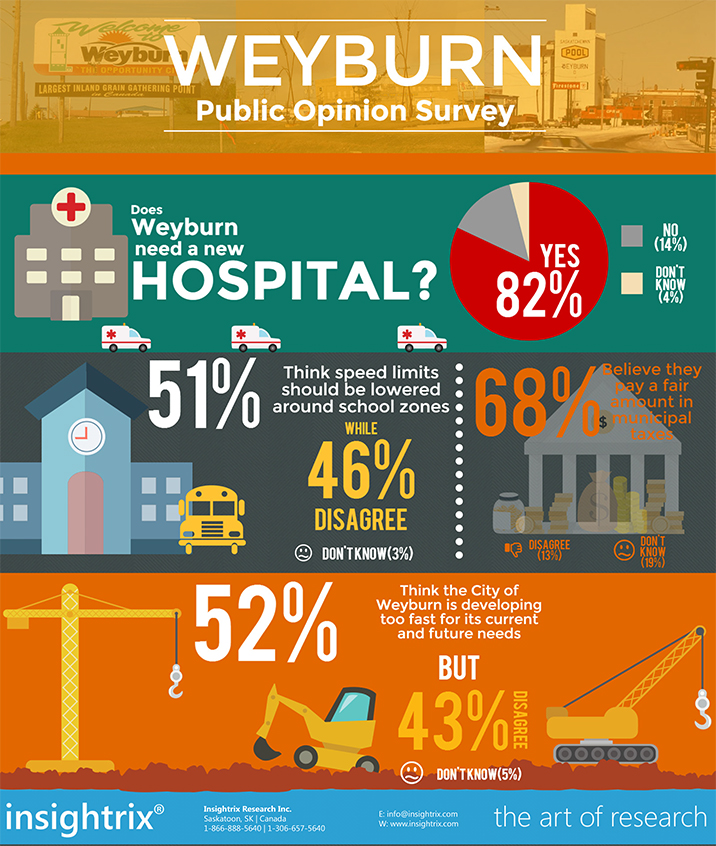 A total of 320 randomly selected Weyburn residents participated in the research study, which was conducted over the telephone from February 18th to March 3rd, 2015. Quotas were set by age and gender to match the city’s population.  The results for this study are accurate within ± 5.39 percentage points 19 times out of 20.