March 18, 2016 / insightrix / Comments Off on SaskParty on an Upswing in Week Two of the Campaign; NDP Support Remains Flat

A new independent Insightrix Research online poll finds more voters plan to cast their ballot in favour of the SaskParty on April 4th when compared to the past several months.

Presently, 61% of decided Saskatchewan voters(#) state they would cast their ballot for the SaskParty, while 29% would vote for the provincial NDP and 6% for the Liberals, if a provincial election were held today. Equal proportions (2%) would vote for either the Green Party or the Progressive Conservatives. Support for the SaskParty has steadily risen from an all-time low in November of last year, with continued momentum since the official start of the election. In contrast, support for the NDP has remained relatively steady over the past several polls. 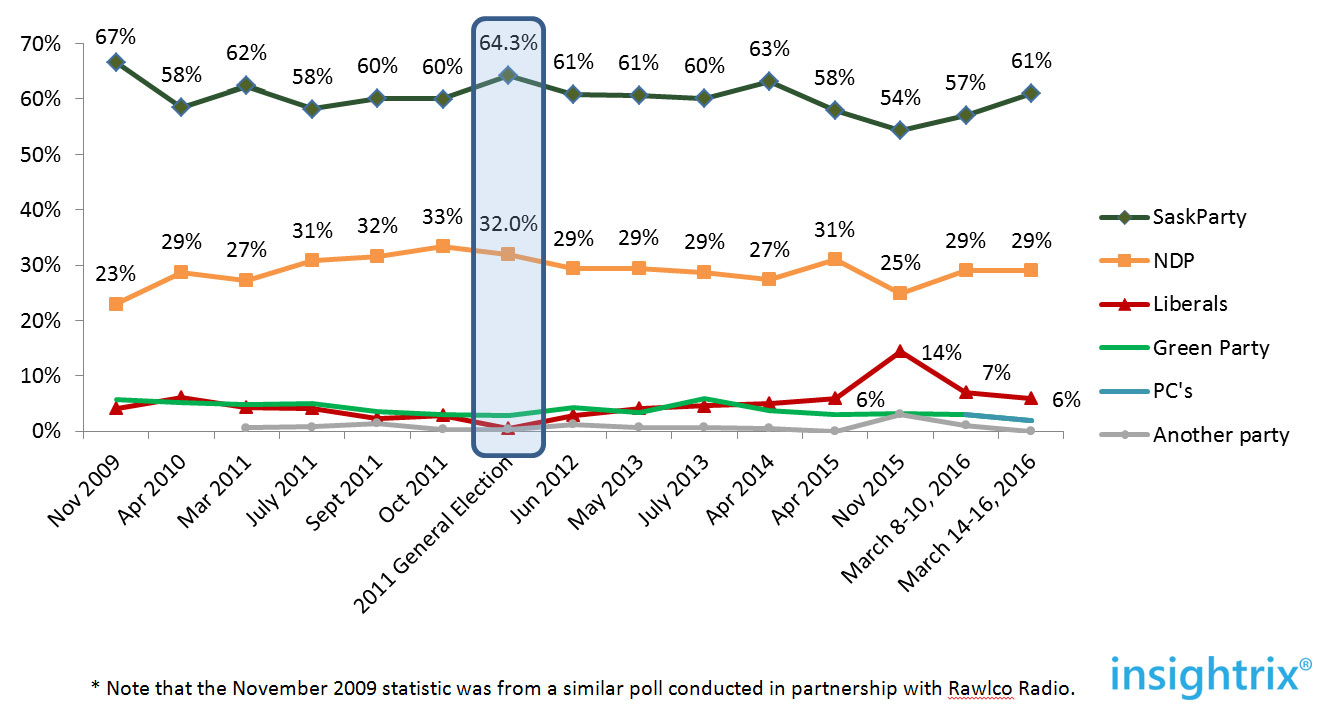 Demographically, those aged 18 to 34 are less likely to say they plan to vote for the SaskParty and more likely to support the Liberals. However, one half of the younger generation still intend to vote for the incumbent party. No differences are noted by gender. 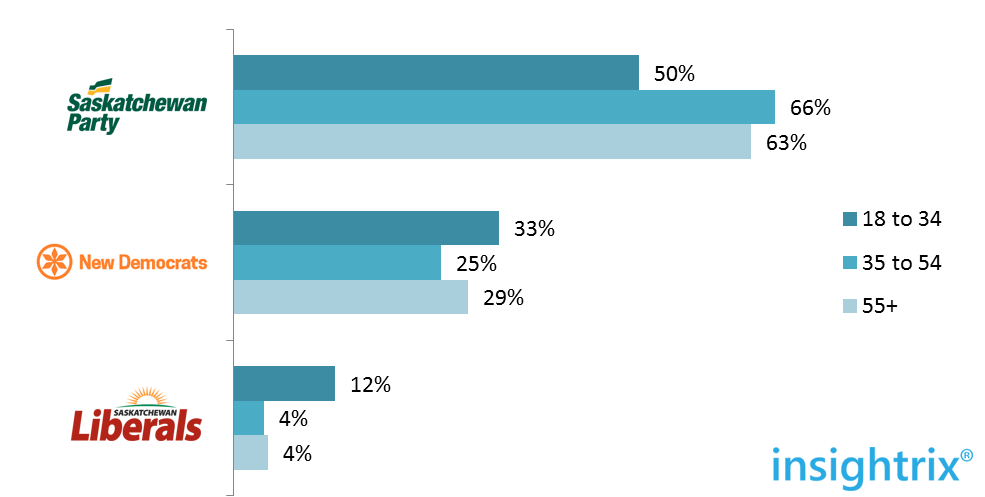 Regionally, we continue to see greater support for the SaskParty in the rural areas and greatest support for the NDP in Regina. In fact the two major parties are in a statistical tie in the Queen City. However, the SaskParty currently has a strong lead in Saskatoon and is up from 47% in our November 2015 poll. 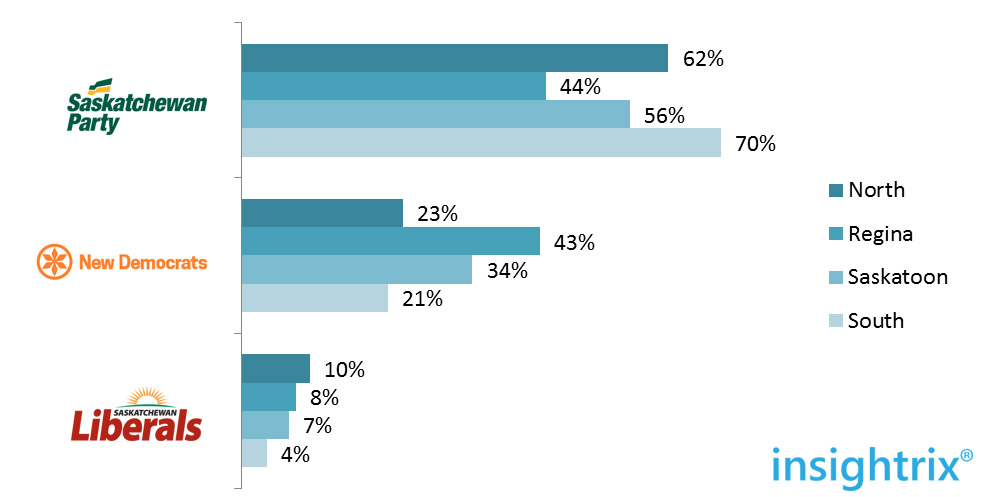 Our poll also asked Saskatchewan residents how much of an impact various factors have on their decision of which party to vote for. The findings illustrate items that have the greatest impact relate to a party’s stance on specific issues and the party’s past performance. Of note however, the leader of a party has a greater impact than the MLA running in one’s local riding. 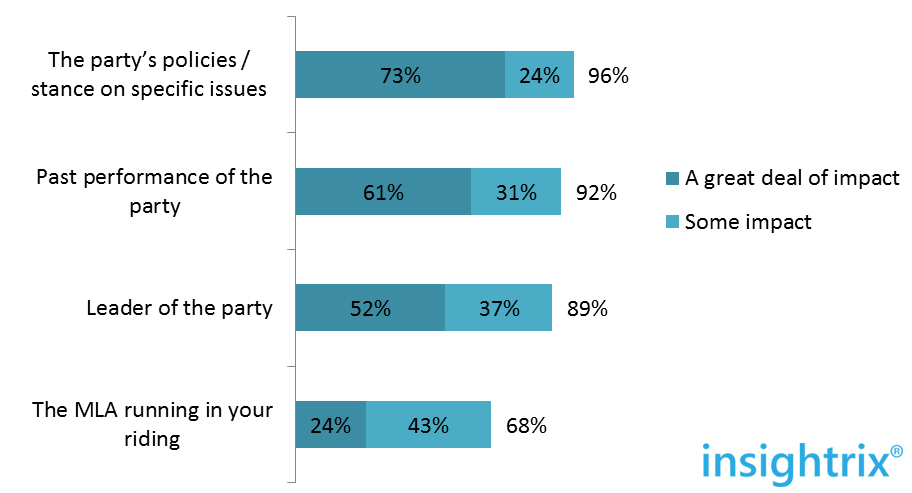 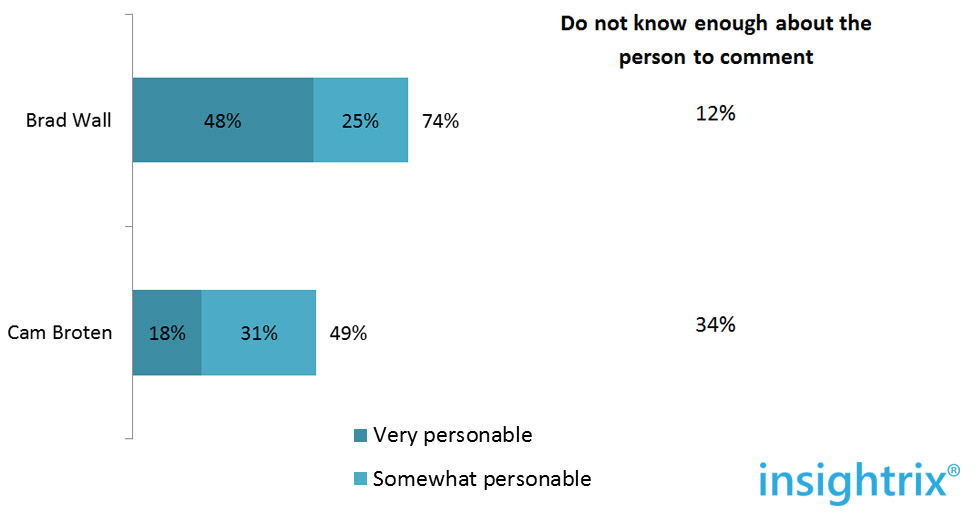 Research Details
A total of 801 randomly selected SaskWatch Research® panel members participated in the online research study from March 14th to 16th, 2016. Quotas were set by age, gender, and region to match the general population of the province. Since the research is conducted online, it is considered to be a non-probability proportion sample and therefore, margins of error are not applicable. Comparisons have been made to similar polls that used the same methodology, quotas and sample source.

About SaskWatch Research®
Insightrix began developing its SaskWatch Research® online market research panel in October 2007, using high-quality techniques including telephone recruitment and referrals from existing panel members. Presently, there are over 15,000 active panel members representing all regions of the province and distributions of the general population. The panel membership closely matches the 2011 Census based on age, gender, household composition, household income, and education. For more information, please visit http://saskwatch.ca.

About Insightrix
Founded in 2001, Insightrix Research Inc. is a full-service market research firm that helps clients develop, administer, and manage data collection and information strategies. From its office in Saskatoon, Insightrix offers a comprehensive range of research services.