It looks like it’s going to be spooky in Saskatchewan for Halloween 2018.

We also found out that about the same amount of men (60%) and women (58%) plan to celebrate Halloween, and that more folks with more than one kid in their household (77%) plan to get in on the fun than those without any children (48%).

Saskatchewan residents of Indigenous ancestry (70%) are also more likely to plan to get in on the Halloween festivities.

What will they get up to for Halloween 2018?

When we asked Sask. residents who said they planned on celebrating Halloween 2018, we got a whole range of responses. According to our survey, it looks like Saskatchewan residents are planning a traditional Halloween this year.

Is it possible to be a Halloween Grinch? Maybe – as 1% of residents who plan on celebrating Halloween also plan to turn off the lights and hide when the doorbell rings. 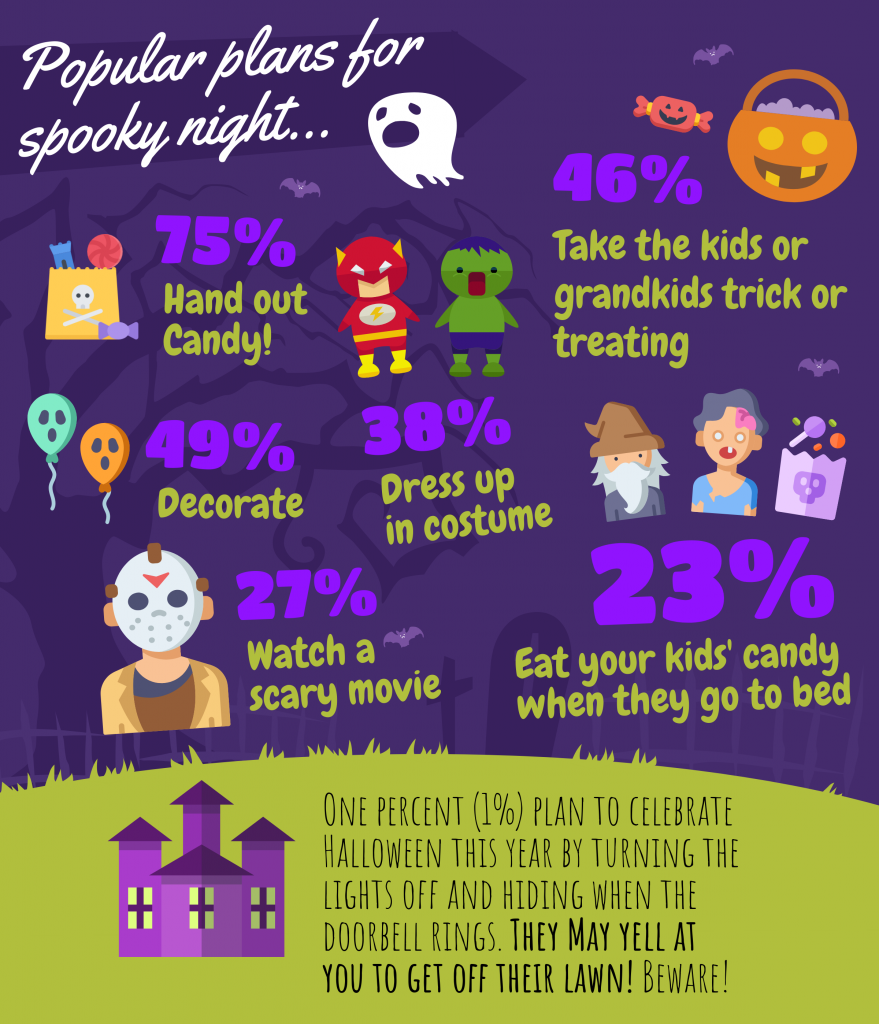 Where will Saskatchewan trick or treat this Halloween?

Saskatchewan residents have a whole lot of choices when it comes to where they plan to trick or treat this October 31. 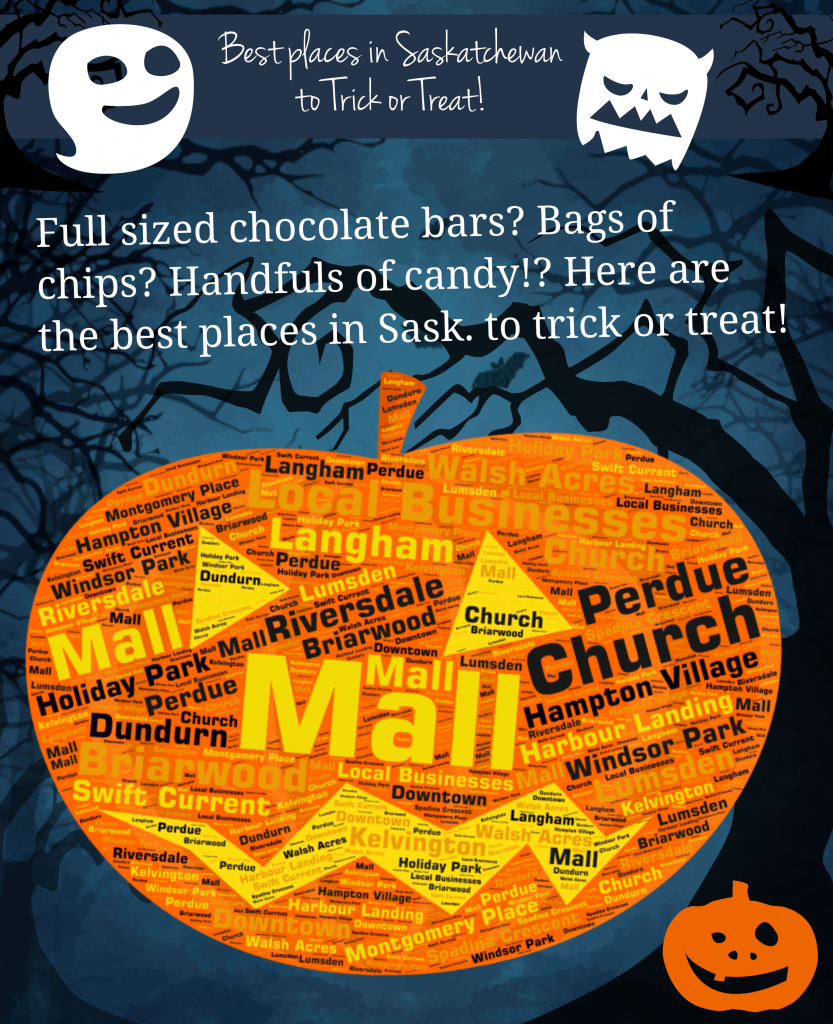 Stop trick or treating? At what age?

We asked everyone who completed our survey what age they thought it was appropriate to hang up the pillow case for good and stop trick or treating.

In descending order, here were the other responses to the question of what is the appropriate age to quit trick or treating: 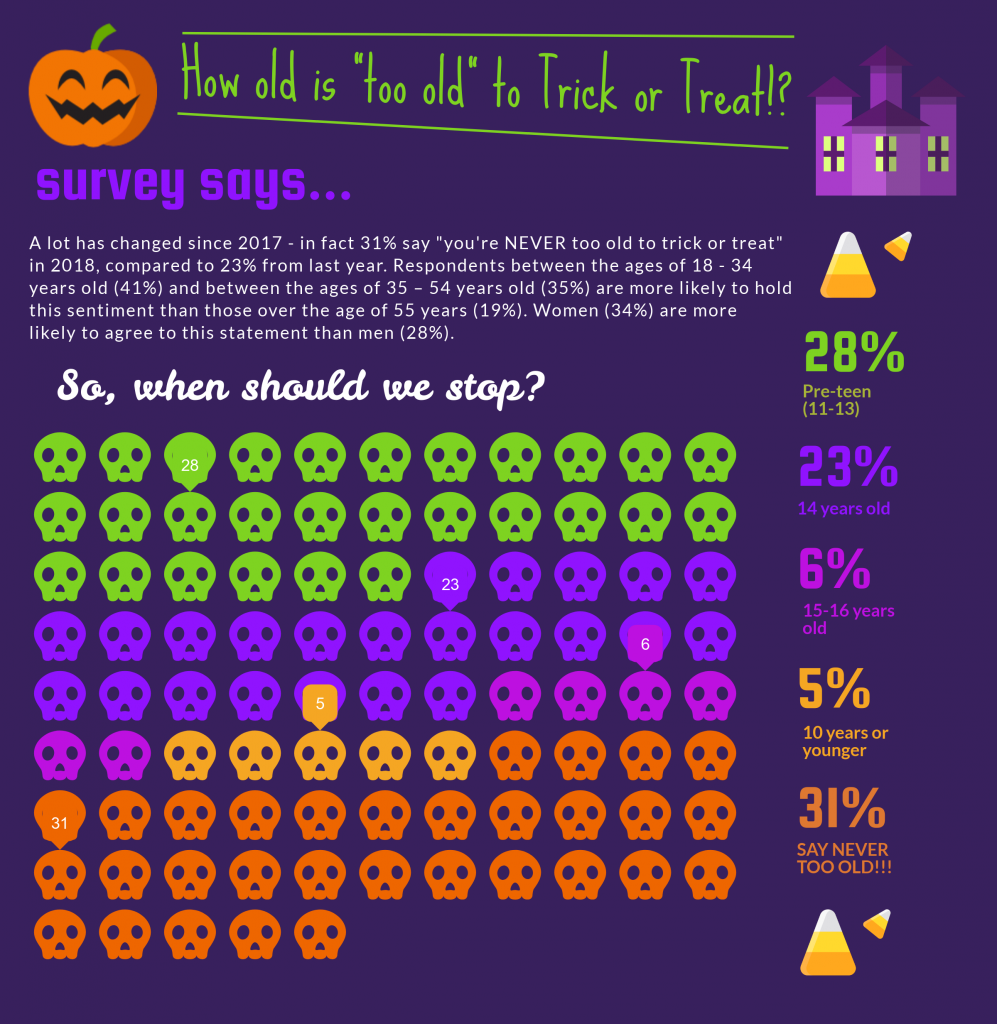 Lots of Halloween fun on the way for Saskatchewan!

It turns out that many Saskatchewan residents are planning on getting in on the fun this Halloween. And many of those planning to celebrate Halloween have a range of plans for activities.

Trick or treating remains a relatively popular activity, judging by the number of residents planning to hand out candy this year and take the kids or grandkids trick or treating – and the places they plan to go to get that candy are quite varied. 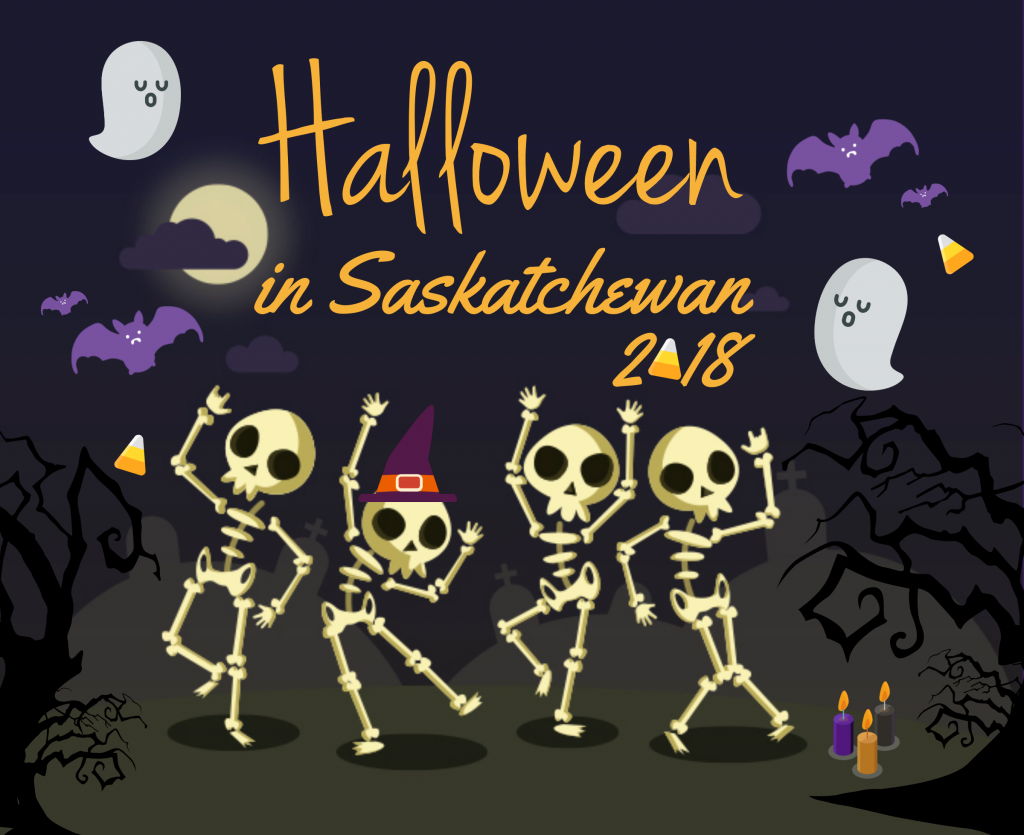 February 15, 2018 / insightrix / Comments Off on Valentine’s Day in Saskatchewan

So, between February 5–8, we asked 805 Saskatchewan residents from all over the province how they feel about the holiday and how they plan to spend it.

It turns out residents in Saskatchewan think Valentine’s Day is a commercial holiday.

While 18% love Valentine’s Day because it lets them show how much they care, the bulk of those we surveyed were undecided, with 62% saying that the holiday of love is, “OK, I guess”.

Valentine’s Day is declining in popularity slightly, though, compared to a couple of years ago. In 2016, 15% of residents polled stated it was a commercial holiday, 25% said they loved it and 59% were undecided.

It turns out that Valentine’s Day is more popular in Saskatoon than it is in Regina.

Love is in the air in Saskatchewan!

Nearly 3 in 4 Saskatchewan residents (74%) talk about being in romantic relationship in 2018.

That said, compared to 2016, the number of those in a romantic relationship has declined slightly, down from the 76% who stated they were in a relationship in that year.

If you’re unattached, it pays to have friends!

We asked residents who are in a romantic relationship how they met their significant other and the most common answer was through friends (39%).

Like many kinds of birds, Saskatchewan residents may mate for life…

We asked respondents who are currently in a romantic relationship how long they’d been together, and more than a third (36%) reported they’ve been with their significant other for 20 years or more! 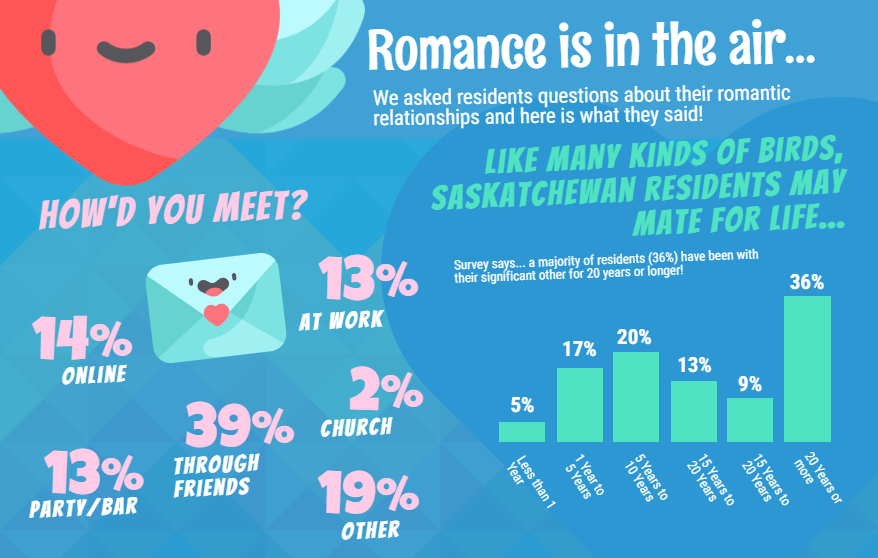 Enough talking! Make with the presents!

More people we surveyed say they are not planning on buying Valentine’s Day presents (55%) than those who said they are (45%). Most people we spoke with who plan on buying a gift said they plan on spending $100 or more (39%) on gifts for their significant other – talk about big spenders!

The remaining 6% may be sleeping on the couch this Valentine’s Evening, as they confess they plan on spending below $20. And they say romance is dead…

This is all pretty good news for significant others this year, as expectations are much lower than reality.

More than one half (56%) of those who plan of celebrating Valentine’s Day this year don’t even expect a present! So, good news if you decided to skip on the flowers and chocolate this year.

And since we’re matching expectations & reality…

Of those that plan to celebrate Valentine’s Day, more than 3 in 10 (32%) of the Saskatchewan residents said they expect to make it past third base just because it is Valentine’s Day. Sixty-eight percent (68%) think otherwise…

What are they going to get for Valentine’s Day in Saskatchewan?

If you think you’re getting a Valentine from your sweet babboo, we hope you’re hungry!

A good portion of the people who said they plan to celebrate Valentine’s Day in Saskatchewan said they planned on giving the gift of grub this year, with 37% saying they plan on taking their significant other out for a romantic meal and another 34% planning to give candy or chocolates.

Other folks may be sending their significant others out to the doghouse though, with 27% of respondents saying they plan on giving greeting cards (either physical or as an e-card) and another 13% stating they plan on proving their undying love with a giftcard.*

Valentine’s Day in Saskatchewan isn’t just for lovers! Well, maybe it is…

We asked those residents we surveyed who don’t have a special someone in their life if they still planned on going out to celebrate the holiday and it turns out that they are staying home in droves.

Almost three quarters (71%) of these folks say they plan to stay in. That said, some courageous singles (29%) still plan on venturing out into the cold, winter night.

These bold singles say they plan on spending the holiday with relatives (45%), friends or co-workers (33%), their parents (8%), a sibling (6%) or someone else entirely (18%). Conveniently, Family Day follows Valentine’s Day, so Saskatchewan residents are taking this week to spend time with family and friends.

Time machine’s here! Everyone pile in!

To round out our Valentine’s Day survey, we asked the Saskatchewan residents we surveyed that if they could, would they rather be dating now (in 2018), or in the 1980s or 1990s. 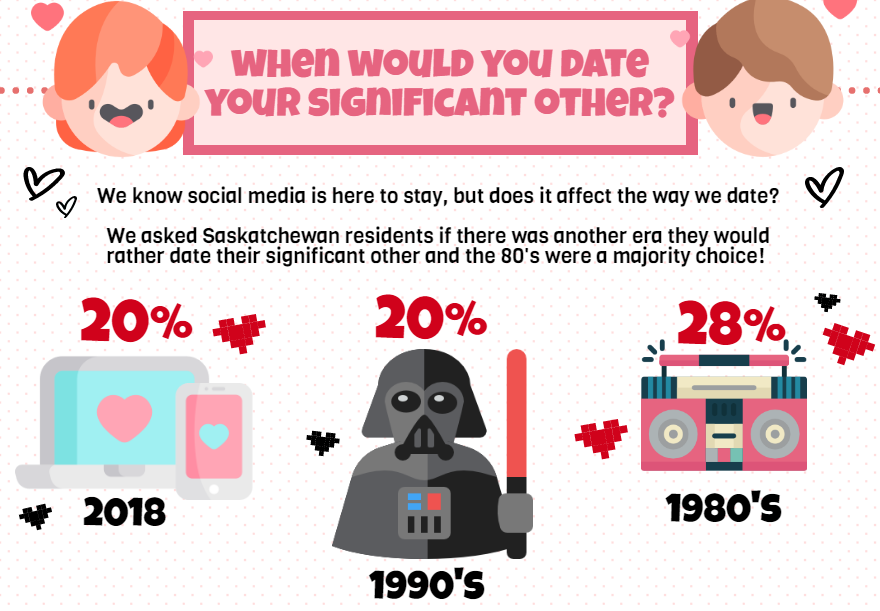 A fair proportion wish they could meet Doc Brown for a Dolorian ride at 88 mph. Almost one third (28%) wish they could be dating in the 1980s and another 20% wish they were hitting the romantic scene in the 1990s.

Other folks are glad they are back in good old 2018. Sixteen percent (16%) of those we surveyed stated they are glad to be dating today. A lot of respondents (35%) weren’t sure for one reason or the other (weren’t born yet, married at the time, etc.).

Why this is the case is complicated, as many Saskatchewan residents give different reasons for why they feel this way. Technology is a large determiner, as was the social climate at the time. Below are quotes straight from SaskWatch members themselves!

In their own words:

“I have been part of the dating world for the past 4 years. Smartphones/social media and online dating makes dating difficult. People are not themselves – hiding behind their phone/computer screens. They tend to be braver. But when it comes to actually meeting – they become cowardly.”

“Dating is different nowadays because nowadays both parties pay for the meal. 20 or 30 years ago, usually it was always the guy that paid for the date.”

“In many ways dating is much less formal than it used to be. There don’t seem to be as many rules which makes it hard to know what to expect sometimes, but also is a lot more freeing.”

“Dating is hugely different than it was 20-30 years ago due to social media and smartphones. There is less and less personal organic interactions. Communication has changed, and in some ways people aren’t as accountable when hiding behind a screen than if they were face to face. There can seem to be many negative changes, but a positive would be that technology allows people to meet faster (in an instant) than requiring them to actually be physically face to face.”

Check out the rest of the infographic below!

A total of 805 randomly selected SaskWatch Research® panel members participated in the online research study on February 5 through February 8, 2018. Quotas were set by age, gender and region to match the general population of the province. Since the research is conducted online, it is a non-probability proportion sample; therefore, margins of error are not applicable.

Thank you for being a part of the SaskWatch panel!

The holiday season is starting and, as per previous years, SaskWatch will have an initiative to further reward our members and also help local charities in our province.

For the past 4 years we have tied our end of year donations with a referral program to all members. We received a lot of positive feedback on previous years’ initiatives, and based on your feedback we will expand this year’s program.

Here is how it’s going to work:

***Remember that the person you refer needs to use your unique referral link to register to our panel, or our system will not consider the new registration as a referral.

Thank you for participating and Happy Holidays! 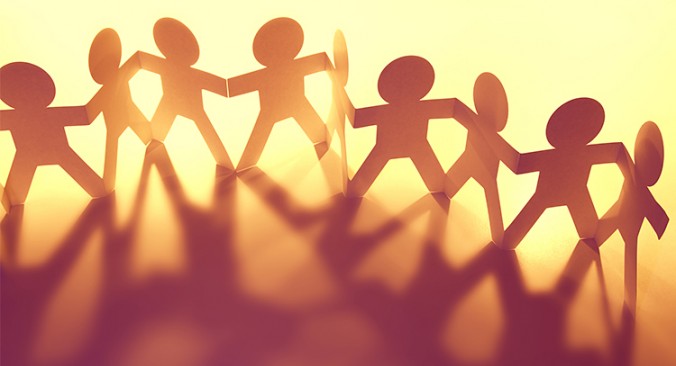 The holiday season is starting and, as per previous years, SaskWatch will have an initiative to help local charities in our province.

For the past 2 years we have tied our end of year donations with a referral program to all members. We received a lot of positive feedback on previous years’ initiatives, and based on your feedback and requests, we have expanded our donation program for this year. Here is how it’s going to work and how you can help:

Here is the list of SaskWatch charities selected this year for our donation pool:

Please note that we are taking suggestions for charities in Estevan & area and Weyburn & area. You can send your suggestions to saskwatch@insightrix.com.

*Note that people you refer to SaskWatch need to register using your unique referral link, or the system will not recognize it as a referral from your account.

You are invited to take part in our first 2013 Bonus Referral Program!

– Until Monday, June 3rd, 2013, we are increasing the amount of points you receive per valid referral to 50 points for each person you refer to the SaskWatch panel.

– In order to receive your referral points, the people you refer MUST REGISTER TO SASKWATCH USING YOUR UNIQUE REFERRAL LINK . This is the only way the system will know the referral came from you, and your account will automatically be credited 50 points once those you refer activate their account with SaskWatch.

To receive your unique referral link, please to go the “refer a friend” tab on top of this page and follow the instructions. Your referral link will be emailed to you. You can also see your referral link at the end of every survey you complete.

Hope everyone is enjoying the great weather that finally reached us here in Saskatchewan!

New Study Released: CCS awareness higher on Prairies than the rest of Canada

The online survey of 1,548 Canadians, commissioned by IPAC-CO2 with support from Carbon Management Canada (CMC), was conducted by Insightrix Research, Inc. between Sept. 27 and Oct. 28. 2011. For more information on the study, please visit CMC’s website: www.cmc-nce.ca or IPAC-CO2’s site at www.ipac-co2.com/projects .